skip to main | skip to sidebar


MAKE NO MISTAKE.. THIS MOVIE IS ONLY 'SOMEHOW ALIEN RELATED'


This wasn't clear in the prior months of the film release; studio didn't comment much about this, remaining way way vague considering that the Alien fanbase would bring 10s if not 100 M$ at the box-office... nobody had a cleared answer but here it is:
Prometheus is pretty much not Alien related. It shares very very little with the Alien franchise.
Remember Alien (1979)? Remember the ship they received a distress call from and visited?
Well Prometheus tells the story of the creatures that build this ship in Alien (1). We'll refer to them as 'Space Jockeys'.
Space Jockeys may have created the Human race at their image. (creationism vs. darwinism thema underlying.. interesting SF here, completely underdeveloped in the movie and that's a shame)
The movie Prometheus is about how an expedition tries to encounter them after Space Jockeys left (directly or not) on various places on Earth maps pinpointing their location in space.
After a 2 years journey, the 17 people expedition lands on a moon on which they discover a mysterious pyramid full of dead Jockeys and creeping Alien-related creatures (no Alien per se but same family..)
The expedition will somehow prevent Earth destruction from biomechanical Jockeys - somehow it seems there's a difference between 'naked' Jockeys (like the one we see in opening sequence sacrificing himself on Earth to create Human beings) and biomechanical Jockeys that are found on the moon.. looking like soldiers/engineers.

At best this movie is a spin-off of Alien; no character in common (unless the Jockeys.. I don't know for you but I didn't care at all for them in the original Alien (1979) .. didn't even notice them to be honest..) only Weyland corporation and well, Ridley Scott.


It would have been so so honest to say it's a 'action/sci-fi movie about human trying to find life origins .. with a few funny cameo of Alien franchise-components, directed by the guy who made Alien 30+ years ago'
That's all it is.


And no, it's not okay if a studio exec says "Well we really need to see at least one Alien creature in your flick, Ridley" and you reply "Sure! Let's put one on the last scene for 10 seconds"


(+) It's entertaining for sure; well paced, slick editing. Careful; it's more action than sci-fi. Once you know it you can enjoy it.
(+) Photography is decent; it's rather solid.
(+) [not observed even if I saw it in 3D] Reviewers say 3D is great in it.. was only my 3rd movie in 3D so I can't discuss this..
(+) Acting's pretty good for what they have to play.

(-) Don't sell us an Alien movie. It's even less related to Alien than any of the (atrocious) Alien vs. Predator flicks.. There's only like 4 minutes of Alien in this.
(-) Screenplay is very much action-driven (the good one, not the great one), not much sci-fi after the first 30 minutes.. sci-fi themes get dropped. Too many characters for sci-fi
(-) See below; LOTS of (not-interesting) open questions and inconsistencies..

Soooooo....  WHAT ARE THE SPACE JOCKEYS ANYWAY? 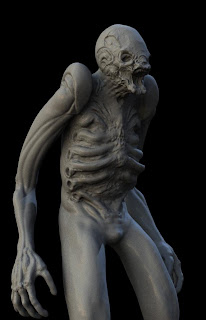 First question: why do space jockeys give coordinates to their moon to Humans? (that's not even their home planet, right?!   That's a moon. On which they're experimenting some nasty stuff)
Are (fleshy) jockeys and biomechanical jockeys the same race? Several theories are circulating; one is that biomechanicals are an evolution of jockeys, an other one is that they're two co-existing races at war etc.. I guess the sequel will answer that..
Given that Prometheus' screenplay comes from Damon Lindelof, one of Lost (tv series) creator I have no doubt we'll have answers.
Or do I?
Isn't Lost  the most frustating tv show ever?   That translates fairly good here; it's more good than bad but very messy as the script can't hold a straight/meaningful direction for more than 15 minutes.
I think our good friend Damon will show his unique sense of adding layers and layers of nonsense/characters/sub-sub plots to Prometheus so that Prometheus 5 will bring us somehow in the late 60s California..  'nahh.. wait!  I'll make sense in #6..'    Yeah, right.

Bring some real sci-fi writer if you want to do sci-fi. Hire whoever wrote 'Children of Men', 'Moon' or '12 Monkeys'.

Space jockeys have a twisted sense of humor: They always bury their humangous space ships into the ground and make them look like a cave.


If you're a space jockey and all your buddies get killed by Aliens following some crazy ass military experiments: enter a stasis pod to get some sleep and wait for rescue. Careful; you may wait 2,000 years in it.


And behold if you wake a Jockey up; you can expect him to be rather grumpy and rip your head off even if you spent 100s of hours learning his language and try to be nice.


It is pretty much evident that a space jockey head can be stimulated by shoving in a needle and applying 30 Amps. Try 40 Amps to see the head explode.


Jockeys are pretty much as dumb as humans, no need for DNA analysis to assess that; If a Jockey's mission is the destruction of an entire race, and he has several space ships at his disposal with which to carry out your mission, it's PERFECTLY OKAY for him to become obsessed with killing some random girl who may/may not have had something to do with his first ship not getting being destroyed. The Jockey doesn't care, he crushes.


SUPPORTING CHARACTERS ARE ALL DUMB

A few facts...
- On an alien planet, if your sensors say the air is breathable, take your helmet off and find out.
- If you see a creature that looks like a King Cobra about to attack, talk to it and be nice.
- The Captain who "only fly the ship" can deduce alien military applications by looking at the outside of a pyramid.
- If you see an alien worm burrowing into your eyeball, don't seek medical attention, just ignore it and hope it goes away.


Is David Prometheus? Did he stole the "black goo thingy" to create a new breed? or to kill humans ('his' god) and become a god? Did he set the command of the alien ship to go to earth somehow? Why is it a movie with 20 characters in it when 8 would have been enough and could've been properly designed?
Hint: do the sequel with Shaw and David and that's it. 2 hours with 2 characters with flashlights on a foreign planet. Here you'll have a sci-fi flick.

- An alien creature the size of a cuttlefish will become as big as two elephants without food or water in a matter of hours.
- Alien control panels have boiled eggs for buttons and are controlled by flute.
=> Awful newage rubbish. Darker than 'Avatar' or 'The Fountain' but still not-needed and pretty much very ridiculous. Ridley Scott has nothing to say when he has nothing relevant to shoot. It was true 30 years ago and still is.


WHAT WE COULD BE ABLE TO DO IN 70 YEARS

- Travel through the universe way way way much faster than the speed of light using ion propelled spacecrafts. Up yours, Einstein!
- We'll be able to deduce the exact location of a planet billions of miles away by looking at some primitive cave drawings.
- Assess that a white woman who don't want to have sex with a black guy is a robot.
- When being one of the most amazing living geologist be sure to have a redneck haircut, punk tatoos, act like an asshole so everybody understands that you'll die first and be sure no to bring any orientation skills to get trapped while everybody else is safe.
- iPads are standard technology in 2094

Voldemort does steroids. That's now the only thing I'm sure of after watching Prometheus.

That and if you're not expecting much from this (especially an Alien related film) you could enjoy  a well-paced action/sci-fi flick about life origins, whatever 'Mission to Mars' should have been a couple of years ago.

Alien 79 is a great classic. Is this film going to be one in 20 years ? mmmmh. BTW, what are going to be the classic of tomorrow made today ?

Check out the music I make

1st 'commercial' album is out! You can find it at the usual places (amazon, iTunes..)
+ some stuff done under my real name :D
Enjoy the blog, Peace!